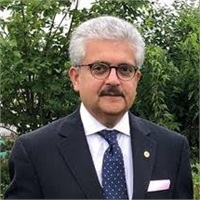 Mr. Khandwala received a BS in Economics, Accounting, International Business and Computers from the University of Bombay, India, and an MBA in Investments, Corporate Finance, and International Finance & International Marketing from the University of Hartford. Mr. Khandwala has overall responsibility for US and International equity management including the direction and implementation of quantitative equities research. He chairs Wright’s investment committee which sets overall investment strategy and asset allocation. Additionally, he is the portfolio manager for Wright’s equity products. Mr. Khandwala manages the Mid Core Strategy which received “Manager of the Decade 2014” as well as “Manager of the Decade 2013” award and “Top Guns Bull & Bear Masters – December 2014” for Large Growth Strategy from PSN/Informa. In addition, Mr. Khandwala also received “Best of The Best” award from PSN/Informa# for the Large Growth Strategy he manages as of September 2014. Mr. Khandwala has been published in the Journal of Portfolio Management and has been involved in conducting empirical research in finance. He was also responsible for the management of 21 single country and regional funds domiciled in US and in Luxembourg. He is a member of the New York Society of Security Analysts. Mr. Khandwala is quadralingual in English, Hindi, Gujarati and Marathi. In 2006, Mr. Khandwala received the Anchor Award from the University of Hartford as a distinguished alumnus. Mr. Khandwala served as Chairman of the Board of St. Vincent’s Medical Center Foundation from 2014 to 2016. Mr. Khandwala was also a member of the Investment Committee of the St. Vincent’s Medical Center Foundation until July 2017. In 2016, Mr. Khandwala was selected to the Physicians Contract and Compensation Committee of the St. Vincent’s Medical Center, which he served until June 2020. In 2018, Mr. Khandwala acquired 100% of The Winthrop Corporation, parent of Wright Investors’ Service, Inc., through Khandwala Capital Management, a company he owns and controls. Mr. Khandwala holds the Series 65 securities license. Mr. Khandwala joined Wright in 1986. Investment experience: 34 years